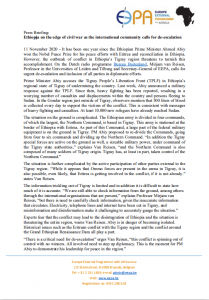 11 November 2020 – It has been one year since the Ethiopian Prime Minister Ahmed Abiy won the Nobel Peace Prize for his peace efforts with Eritrea and reconciliation in Ethiopia. However, the outbreak of conflict in Ethiopia’s Tigray region threatens to tarnish this accomplishment. On the Dutch radio programme Bureau Buitenland, Mirjam van Reisen, Professor in the Universities of Leiden and Tilburg and Secretary-General of EEPA, calls for urgent de-escalation and inclusion of all parties in diplomatic efforts.

Prime Minister Abiy accuses the Tigray People’s Liberation Front (TPLF) in Ethiopia’s regional state of Tigray of undermining the country. Last week, Abiy announced a military response against the TPLF. Since then, heavy fighting has been reported, resulting in a worrying number of casualties and displacements within the country and persons fleeing to Sudan. In the Gondar region just outside of Tigray, observers mention that 500 liters of blood is collected every day to support the victims of the conflict. This is consistent with messages of heavy fighting and casualties. At least 10.000 new refugees have already reached Sudan.

The situation is further complicated by the active participation of other parties external to the Tigray region. “While it appears that Oromo forces are present in the arena in Tigray, it is also possible, even likely, that Eritrea is getting involved in the conflict, if it is not already.” states Van Reisen.

The information trickling out of Tigray is limited and in addition it is difficult to state how much of it is accurate. “We are still able to check information from the ground, among others through the international organisations that are present,” explains Professor Mirjam van Reisen, “but there is need to carefully check information, given the inaccurate information that circulates. Electricity, telephone lines and internet have been cut in Tigray, and misinformation and disinformation make it challenging to accurately gauge the situation.”

Experts fear that the conflict may lead to the disintegration of Ethiopia and the situation is threatening the entire region, warns Van Reisen. Abiy is in danger of becoming isolated. Historical issues such as the Eritrean conflict with the Tigray region and the conflict around the Grand Ethiopian Renaissance Dam all play a part.

“There is a critical need for de-escalation” urges Van Reisen, “this conflict is spinning out of control with no winners. All involved need to step up diplomacy. This is the moment for PM Abiy to demonstrate his leadership for peace in the region.”