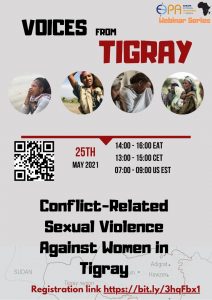 On 25 May 2021, the webinar “Conflict-Related Sexual Violence against Women in Tigray” took place in the framework of webinar series “Voices from Tigray”. The aim of this online meeting was to give a platform to testimonies of witnesses, describing the atrocities that occurred in the conflict in the Tigray region. The meeting was chaired by Hon. Julia Duncan-Cassell, former Minister of Gender in Liberia. International experts discussed the consequences of rape and gender-based violence on Tigray women and girls and the implication of soldiers, particularly Eritreans, in these crimes In conclusion, experts called for peace in the Horn of Africa and an end to the violence and discrimination of the civil population. The meeting’s main outcomes included calls for all foreign troops, particularly Eritreans, to withdraw from Ethiopia; referral of Eritrea to the International Criminal Court; and immediate cessation by all parties of rape as a weapon of war.

Member of the European Parliament Assita Kanko (ECR) opened the panel commenting on the testimonies of witnesses of the sexual violence as heartbreaking and horrific. MEP Kanko underlined that in face of the terrible violence that women reported, the European Union has the duty to listen carefully and “commit to a message of hope, and the promise of action.” MEP Assita Kanko highlighted the need to prosecute perpetrators of atrocities such as rape, which is used intentionally as a weapon of war against the Tigray population. Furthermore, she quoted Sir Mark Andrew Lowcock, the UN Under-Secretary-General for Humanitarian Affairs and Emergency Relief Coordinator, who described the reason why civilians are raped: to humiliate, terrorise and traumatise this and the next generation. MEP Kanko strongly condemned the presence of Eritrean soldiers in the Tigray region under the supervision of Addis Ababa’s government. Kanko also underlined that, as a consequence of the current situation, Tigrayan women could face high losses of economic empowerment, backsteps in social equality, but also could be forced into prostitution and starvation. MEP Kanko concluded her opening by  calling  for actors to “concert and coordinate international pressure and targeted sanctions,” as the war’s implications described above will not end with the conflict.

Testimonies from women in Tigray were presented, which highlighted the Tigray women’s  experiences. The emotional stories presented on behalf of victims detailed the personal consequences of the abuse for the victims, which include severe physical and mental trauma. A third of rapes have been executed as gang rapes, over multiple days, usually in public, or in front of family members, including their children. Women have had their genitals burned and their uterus filled with foreign objects, including burning sticks, stones and sand, in attempts to make women of Tigray infertile. Relatives have been forced at gunpoint to perpetrate rape. The testimonies said that witnesses of the crimes committed, along with the rape victims’ children, including babies, were killed in the violence. These acts and verbal confirmation of the intention of the acts by perpetrators are signs of genocide, according to the speakers.

After the testimonies, Selam Kidane, an Eritrean human rights advocate, told the conference that Eritrea has been committing crimes against its citizens and against Tigray. She said that Eritrean soldiers deployed in Tigray have suffered under the plight of National Service, which is a form of slavery that has been qualified as a crime against humanity. She asked the international community to refer Eritrea to the International Criminal Court for the crimes committed by Eritrea in Tigray.

Tigray Human Rights advocate, Meaza Gidey, called the rape against women in Tigray a genocide, stating that “women are raped because they are Tigrayan, to cleanse the bloodline. The world has all the facts. I call on all relevant actors to listen to the cries of the innocent women of Tigray. They are not only being raped, they are also starved to death.” She also called for a UN-led independent investigation to be carried out to hold all the perpetrators of such crimes accountable.

– The withdrawal of all foreign troops, particularly those from Eritrea
– The referral of the deployment by Eritrea of National Service in a foreign jurisdiction to the International Criminal Court
– All parties in Tigray to end with immediate effect the impunity of the use of Rape as a Weapon of War”.